The text of our Protestant English Bibles include two different “meetings” for King Saul and Future-King David. The first “meeting” comes about when God’s spirit torments Saul so that he needs the soothing power of music. Saul’s courtiers find David, the son of Jesse, a mighty warrior, well spoken, and generally the type of person who fits in a royal court. So, Saul sends messengers to Jesse to draft his son into his service where he does well and finds favor in Saul’s eyes (1 Sam 16.14–23).
(We’ll start talking in my next post about the origins of the different text [OG, LXX, MT, etc], but I wanted to take a moment and show why it matters in this post using a well-known example and then [briefly!] commenting on a few others. If you’re interested to see a New Testament example of why some of this matters, you can check out my last post on this topic here.)
This narrative makes a lot of sense. We read about the soothing power of music with response to divine agents in a few different stories, and a powerful warrior who is also well-spoken, skilled, and somewhat attractive seems like a just the person to include in the king’s court. The problem is the very next story.

You see, the next story is one of David and Goliath, where—after David volunteers to fight the giant—we learn that neither Saul nor Abner has any clue about David’s identity or the identity of his father! Indeed, rather than having been sent to stay with Saul (as 1 Sam 16 relates), David has been staying with his father’s sheep while his brothers serve in the army and has never been seen by anyone in the army or around the king until now (1 Sam 17.55–58)! He is not known as a warrior, not as a harp player, not as part of Saul\’s court, and not even as the son of his father, but merely a brave lad.

This doublet has caused all sorts of hoopla. It’s frequently features in “contradictions of the Bible” sorts of posts and equally frequently “defended” in “there are no contradictions in the Bible” sorts of posts. Neither of these kinds of posts does a terribly good job handling the data, but that’s not the point of this post. Instead, I want to use this well-known problem to illustrate something much larger: the Greek Bible and Masoretic texts are not the same. In some books of the Bible, they aren’t even particularly close; Samuel is one of those. 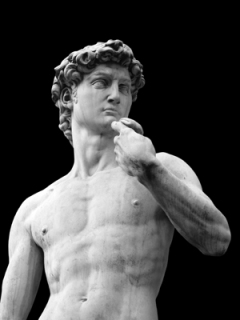 For example, the Old Greek text of Samuel is significantly shorter. The Greek text is missing 1 Sam 17.12–31 (which tells the story of David staying to shepherd the flock while his older brothers go to fight for Saul, Jesse’s commission to David to take his brothers food [taxes?], David’s inquiry about what will be done for the man who fights Goliath, and his interaction with his brothers). That is a lot that is different. Beyond that, just in this same narrative, the Greek text is also missing 17.55–58 (the aforementioned “second meeting” where Saul and Abner find out who David is).
You can read the straight through text here in the ESV (I’ve removed the verses in question) or here in the NETS (which is a funky translation but follows the Greek Bible rather than the Hebrew, so you can see more of the character of difference. You’ll have to scroll down the free pdf to 1 Sam 17). Notice all of the changes and oddities that are now missing?

The difference in this story is hefty: the Greek text is missing about 25 verses from what is in our ~50-verse Hebrew text—and that’s just from one chapter! Indeed, if we look through the rest of Samuel we find lots more situations where events are out of order, where things are added, and where small sections / questions of specifics are different. But it’s not just Samuel: there are enormous differences in length (and sometimes theological developments) in lots of other books of the Hebrew Bible, especially Job (1/6 shorter in the OG) or Jeremiah (15% shorter in the OG) that are at least equal to Samuel. And that isn’t counting all of the different, smaller but still important, areas of change!
At this point, though, you might be wondering “Ok, but which one is right! Which one is original? What is the difference? Where did these differences come from?” Obviously, we don\’t have enough time left to address all of those questions, but I don’t want to leave you hanging entirely. So let’s end with a suggestion:

Our English Bible give undue preference to the Hebrew Text of the Hebrew Bible / Old Testament (HBOT). These reasons are understandable, but severely outdated. Although it’s true that the Hebrew version of the HBOT is older than the Greek, it is not true that the Hebrew text which underlies our Bibles is older than the Greek text we have in the Old Greek and Septuagint versions. In fact, quite the opposite. This recognition–and there is overwhelming proof for much of this, ever since the dissemination of the Dead Sea Scrolls (DSS)–should drive us to place the Greek texts on (at least!) equal footing with the Hebrew. We should take these questions more seriously, and we should start looking more closely at those footnotes in our Bible or reading the NETS. It’s amazing what you’ll pick up, if you do.

2 thoughts on “When David met Saul: Contradictions, the OG, and the MT”