2 Samuel 13 is one of the most disturbing and tragic texts in the Bible. In this text we read that King David’s daughter, Tamar, was very beautiful. Beautiful enough that her half-brother Amnon lusted after her and wanted to sate his lust, but he couldn’t because it wasn’t lawful. After fixating on it for some time, he and his cousin devised a plot where Amnon could isolate and rape Tamar: he pretended to be sick, and when his father—King David—came to ask his son if there was anything he could do for him, Amon requested that David send his sister Tamar to his room to cook for him. And so David sent his own daughter into the center of power of his crown prince and son, Amnon. And, when Tamar was isolated and totally within his power, he raped her and, after his lust had been slaked, he then threw her out of his house in disgust.
In the Hebrew Bible, the Law is very clear that rape is a capital offense (e.g., Dtr 22.25). Normally, the Bible required a number of witnesses and the “innocent until proven guilty,” and—in one accuser vs. one defender scenarios of “he said; she said”—it threw out the accusations of just one person. So we see numerous accounts in both Old and New Testaments about how to handle the question of “evidence” and “witnesses” in the Bible:

A single witness shall not suffice against a person for any crime or for any wrong in connection with any offense that he has committed. Only on the evidence of two witnesses or of three witnesses shall a charge be established (Dtr 19.15).

But if he does not listen, take one or two others along with you, that every charge may be established by the evidence of two or three witnesses (Mat 18.16)

This is the third time I am coming to you. Every charge must be established by the evidence of two or three witnesses (2 Cor 13.1)

Do not admit a charge against an elder except on the evidence of two or three witnesses (1Tim. 5.19)

Anyone who has set aside the law of Moses dies without mercy on the evidence of two or three witnesses (Heb 10.28).

But sexual sins were tricky. Most often, these sins occurred when there were no other witnesses. How, then, could such be handled? Deuteronomy lays out the procedure:

But if in the open country–where there are no witnesses–a man meets a young woman who is betrothed, and the man rapes her, then only the man who lay with her shall die. But you shall do nothing to the young woman; she has committed no offense punishable by death. For this case is like that of a man attacking and murdering his neighbor, because he met her in the open country—where there are no witnesses—and though the betrothed young woman cried for help there was no one to rescue her (Dtr 22.25–27).

The case, here, is what the procedure should be. Imagine the circumstances: a woman who wasn’t a virgin and portrayed herself as a virgin to her husband to be, was in peril if he suspects her (e.g., Dtr 22.13–21). Furthermore, if she is found to be complicit (i.e., that this is seduction rather than rape and she is already engaged), then she’s to be killed along with her seductor (Dtr 22.23–24).
There’s actually a lot of evidence that the “cried out” is a legal term for “make a report.” This is, of course, exactly what Tamar does after Amnon raped her: “Tamar was wearing a multicolored robe with long sleeves, for thus were the virgin daughters of the king dressed. So when Amnon’s servant put her out and bolted the door after her, Tamar put ashes on her head and tore the long robe that she wore, and she laid her hand on her head and went away, crying aloud as she went. (2 Sam 13.18–19).
In one of the many failures David makes following his decision to lust after Bathsheba, David did nothing to Amnon. The Law was clear: if Tamar had been betrothed (which, as a royal daughter she would have been), the punishment was death (Dtr 22.25–27). Even if she hadn’t been engaged (which was almost certainly not the case), he had violated his sister, a capital crime (e.g., Lev 18.9, 11; 20.19; etc). But David refused even to provide even the lesser penalties that would have been required in other situations that were less clear. He refused to do anything at all.
Why, we might ask, would David ignore justice? Why would he not follow the Law? Why would he not do as the Bible required and heed the testimony of his daughter? The answer is as tragic as the story itself is: because it wasn’t politically expedient to do so.  As the Bible records, “David did nothing because Amnon was the crown prince” (2 Sam 13.21 LXX and DSS). 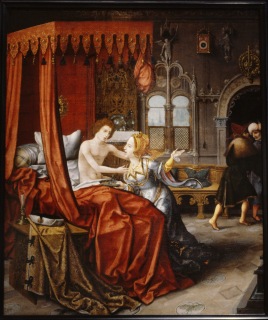 I understand why David wouldn’t want to believe Tamar in the same way I understand why we don’t want to believe some more modern examples: it’s not politically convenient. Certainly, in the case of Tamar, Amnon’s supporters would say the same thing as some others’ supporters (whether Roy Moore or Al Franken, or any of numerous others) have been saying: “Hey, don’t you know Tamar is Absalom’s sister? Don’t you know that Absalom is just trying to become the new crown prince! He’s just trying to get Amnon out of the way so that he can take his power! See? Isn’t that convenient? Notice it’s only coming out now?”
Of course, their responses and David’s responses were not based on desires for justice, but rather in political expediency. Heaven help us if we sacrifice God’s Word for the sake of political gain. Of course, this did not work out well for David, either spiritually or politically. Absalom would kill Amnon for what he did to his sister and, a few years later, would attempt to seize the power from the throne citing—among other things—David’s inability or unwillingness to provide justice to the weak and oppressed.